On Saturday Stevenage played Exeter City in League 1 - the highest level of league football the club has ever been involved in.

To commemorate the occasion The Comet has had a look through the Hitchin Gazette archives and reproduced verbatim this match report and the accompanying photos from Stevenage Borough’s first ever senior football match - a 3-1 victory over ON Cheneck on Saturday, August 16 1980.

The attendance was pleasing, the result was promising and the only ingredient missing was a fitting Borough performance.

They trailed nervously for much of the game, missed several chances and played well below their best but finally grabbed victory with a late blast of goals in the final 20 minutes.

The result brought most pleasure to manager Derek Montgomery. “We know we did not play as well as we can,” he said, “but in the end we got the result against a side that has won this league the last two years running.”

Borough’s efforts to bring the United Counties League first division title back to Stevenage at the first attempt looked to be running adrift during the first half when they did everything but score, hitting the post and forcing goal line clearances, before Cheneck went ahead in the 35th minute.

Five minutes into the second half Montgomery was forced to make his first substitution when a nasty knock required full back Terry O’Neill to come off. He was replaced by Peter Gittings.

Borough continued to press and Danny Dance chased after a long ball from defence. He ran into the penalty area to draw the keeper, who barged him unceremoniously off the ball to provide popular and effective centre-half Jim Daintree with the chance to open Borough’s account from the spot.

Three minutes later Borough sent the fans wild with delight when Peter Gittings put them in front with a superbly-taken goal. Drifting past flailing tackles on the edge of the box, he made his own space to drill an excellent left foot shot wide of goalkeeper.

Five minutes from time the dangerous and irrepressible Dance went through to seal a victory that puts Borough in fine heart for the season. 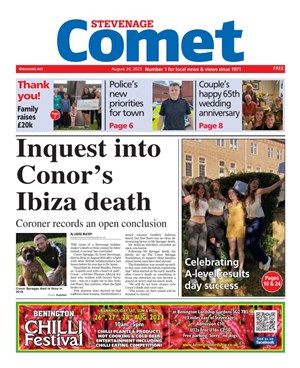 Coronavirus vaccine set to be rolled out next week – who will be first in line?